This is me with my cousin Dale at his dad's graveside service Dale has Multiple Sclerosis and Muscular Dystrophy. I was thinking(which is dangerous for me) that we are about the same age but he is 48 which is a year younger than me. 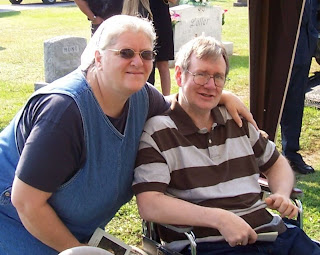 Afterward, we had a family dinner at Dale's older brother Les and his wife Glenna's place. Les is the big fella on the left with the beard. Yes he does Santa and he and Glenna are rein actors. Les shoots black powder guns. That is their daughter on the end closest, granddaughter and sons and his mom in law. Glenna's mom is a sweetheart and a riot. I just love her! 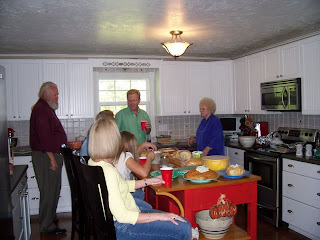 There is mom telling on me behind Glenna and Glenna's sister in law with the dark hair. I was threatened by Glenna after I snapped the picture but I just laughed! 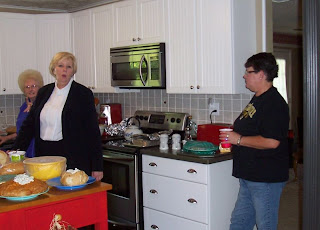 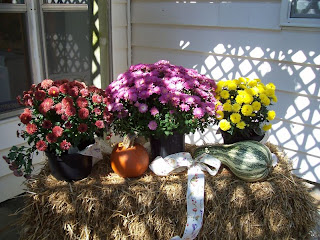 The punkin patch. There are some big ole punkins too! 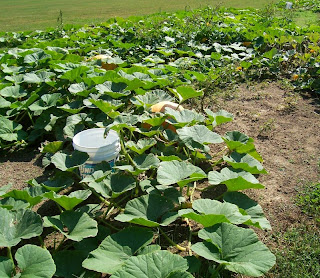 I really like Les' raised garden. Jack is gonna do one for us. He got some plastic drums and cut them in half and bolted them to the wood frames which set on concrete blocks. 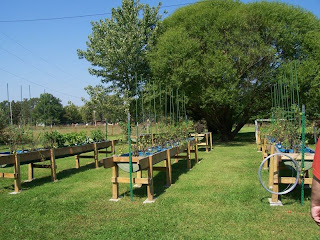 That was our Saturday and I am pooped! Busy days wear me out but I saw some people I haven't seen since I was a child such as Les' Uncle Fred so it was worth it. Blessings until next time!
by Michelle-ozark crafter on 9/27/2008 05:14:00 PM

Mickey has 2 4x8 raised beds but his are still on the ground. These are very interesting and I called him in to look at the picture I had enlarged. Glad you got to see some family and spend a little time with them.
Susan

How fun it would be to have a pumpkin patch. And to see frost on them!

Those raised beds are neat!

Amazing pics!
Thanks for sharing,
Lili

It may have been busy but what a wonderful day! Great photo's Michelle.

So glad you had a great time! Family get togethers are always fun around here too!
Donna

Dear Michelle, I am so glad you got to be with your family at this time. It was fun to meet some of your family. The mums are just beautiful and pumpkins, it is fall!! You look so pretty. It was nice to see a picture of you, now I know to whom I have been getting and sending hugs to for so long. lol. thank you for being such a good friend. connie and lots of hugs to you.

I just love reading your posts :O)
Always so newsy and interesting...that's the sweetest raised garden I think I've ever seen!