I wanted to share some things I thought you might enjoy. At least I hope you do! This is Jack when he was in first grade! I think he was just the cutest little boy. Look at that smile. Can you believe this was in 1959? 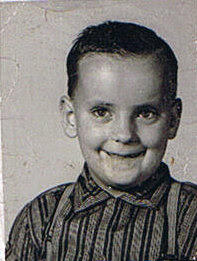 Here is my older half-brother Steve standing, my younger brother Mike and yes that is me! Can't forget to mention the rabbit who was named Mr. French. Why ever we named him that I don't know. This was taken at my uncles house in 1969 in Baldwin Park California not long after mom passed away so that is why my older brother looks so unhappy. He and mom had an argument the day she passed away and he blamed himself for years for her death. 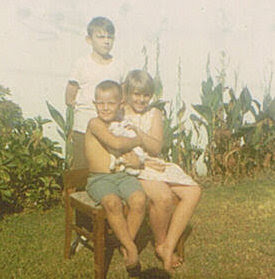 Here is my mom and dad on their wedding day in 1957. I wish it were a better picture but aren't they adorable? I will share some other photos later on I promise. 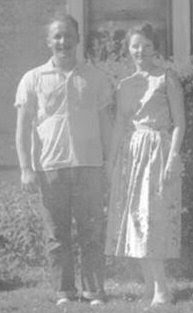 Now on to stitching. This silly afghan still doesn't show up as purple, pink and white even after I tried to edit it. But take my word for it that really is the colors! 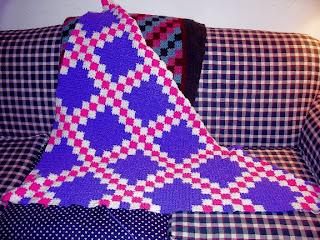 Here is one of the first projects I did after Jack and I got married. It is starting to show it's age a bit but I don't care! If you look close, you will discover my nickname! 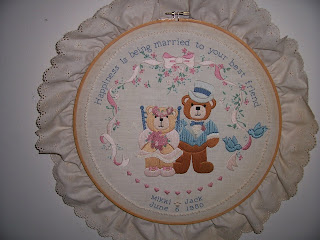 And couldn't go without some funny pics of Katie. This is what I saw from my spot on the sofa! Just feet in the air! Caught her napping in the den while Jack was on the computer. 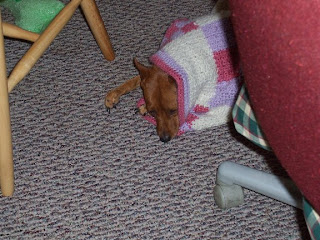 Well hello there Mikki:-) hehe Yup, I enlarged the picture so that I could see your nickname! lol I so enjoyed seeing those old photos...there's just something about old black & white photos that make me smile:-) Your parents were married the year I was born!! xox

I love your nickname too :) What a beautiful keepsake from your special day! Loved seeing all the black and white photos. Jack was adorable as a first grader!
xo

enjoyed your post and your first project is adorable!!
Have a great day!!
:)

I love looking at pictures :D Thanks for sharing them with us!
Katie cracks me up...such a little dolly!

What great old pictures! It's so nice to see those pictures. I just love your dog!
Donna

Do you remember the TV show Family Affair? The butler was Mr French. Do you suppose your bunny was named for him?

I enjoyed your photos and memories!

Thank you for stopping by the back porch, I hope your return often!

I love Katie and your pics of her, she's always "into" things! it's too cute!

Do very many people call you Mikki? I think it's really a cute name....of course I would because I love my Mickey so!!! The first stitching of your wedding is so cute. I really enjoyed seeing the old pictures. Hope you show more.
Susan

Hi, Michelle. Love all the photos. They are wonderful...especially the one of your parents! And of course the one of Jack...and the ones of Katie! One tired puppy!

Thanks for the prayers for those families. It is just so tragic.

Your music jumped me again and I spilled my coffee! (grumble grumble)

You have goodies for me? (UNgrumble, UNgrumble) That's so cool! Did I enter a contest? I can't remember. I've been so busy that I've gone beyond forgetting my car keys and have moved on to forgetting body parts.

Now where DID I put my left leg? It was here just a minute ago!

Anyhoo, here's my email address. Email me and I'll give you my mailing address, K?

I love the wedding crosstitch. My in-laws are married 49 years today. I'll want to make something REALLY special for them next year (God willing). I think milestone crosstitches are one of the best gifts going. I have a birth one for each child and we have a wedding one. Each and every one was made by a different person and has a sentimental story attached.

Wonderful post. :) I love old photographs, and of course you know I love seeing Katie with her shenanigans. :D

I love looking at the photos of your family. How did you wind up in MO? Loved the picture of the wedding sampler and of course, Katie!

Great post, Michelle! I love old photos and the stories that go with them. What a beautiful wedding sampler...something that will always be a wonderful treasure. Katie is soooo cute!

Thanks for your visit today ! It is refreshing to know you more with each visit.

May this week be filled with love, laughter and many blessings!

Great photo's! I really like older family pictures-especially the black and white ones.