About to blow away!

Here is Jack's nearly finished quilt. He just has to do the roosters tail and some more of the border. He has been going hard at it! 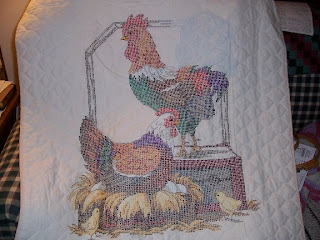 Here is the Bountiful Blessings I have been working on. We have the makings of a good meal so come and join me! LOL! 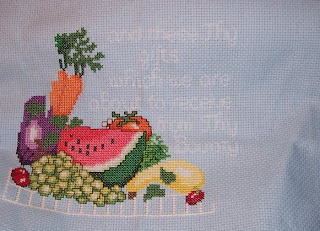 Today was the day for grocery buying in Nevada and I took a few photos. This is a mural of the old Mitchell Hotel that stood where the parking lot is now. I actually lived at the Mitchell for a time in the 1970's when it was studio apartments. It got pretty run down in the 1980's and they tore it down. Sad they didn't fix it up. 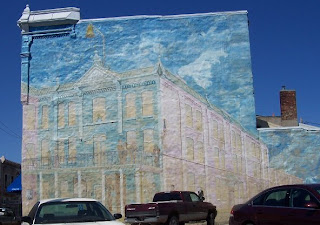 Here is another mural and a beautiful old building in Nevada. It is not part of downtown but was once a bustling area with a hotel and a lot of beautiful buildings. I believe it was the area where the train station once stood. Actor John Huston's grandfather accidentally started a fire that burnt quite a few buildings. Shortly after the family quietly moved away. LOL! 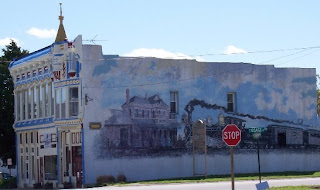 This must be one of the smallest donut shops ever! It was once a service station. Then when they rerouted the highway many years ago it soon was abandoned. It was getting in pretty tough shape and then earlier this year someone bought it, refurbished it and opened a donut shop! It is tiny! 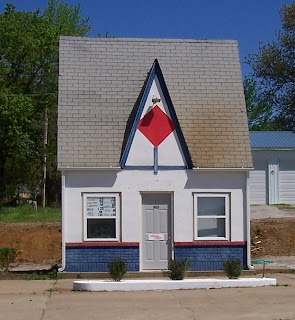 Some flowers out in front of our house. Don't know what they are right off hand but I thought they were pretty. 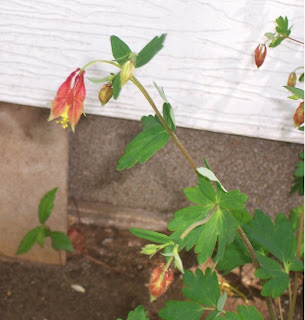 We had some terrible storms around Missouri last night. Tornadoes touched down and did damage in the Kansas City area and a small town in southeast of us. In Arkansas a 15 year old girl was killed when a tree fell into her bedroom as she slept. Please keep the family in your prayers. A 10 year old boy was in the same room but survived. We only had thunderstorms here but it is certainly windy today. About takes ones head off. God bless until we visit again.
by Michelle-ozark crafter on 5/02/2008 03:41:00 PM

Jack's quilt is AWESOME! Not much longer on it. YAY!!!! It's sad they don't refurbish old buildings, it's like losing a part of history. We got new elemantary schools and they tore the old ones down. Too sad as they could have been used for something.

Wow, Jack is making good progress with his stitching. I love your Bountiful Blessings! Thanks for sharing the photos. Sad to hear about the tornadoes. Thank God that the weather is better at your place. Do take care and have a blessed weekends!

I can't believe how beautiful the quilt is that Jack is working on..and to see that he is almost done..amazing !!!!
I loved seeing all the pictures...
Praying for safety for you and yours in your area..
Deby

Well I am from MO.. too. We love going down to the Ozarks on vacation. Jack made a great quilt.
Rooster sure are popular right now.

Hi Michele,
I love that Bountiful Blessings stiching!! So glad to hear you are safe with all those awful storms. I know a couple bloggers from Arkansas and they haven't posted lately. I'm praying they're ok!
xoxo

What a great quilt! This weather has been crazy so far this year, hasn't it?

Wow! Fantastic stitching you two! I love that little donut shop:~) So glad they found a good use for it. Hope the weather gets better as we go along. Take care:~D

You have columbine flowers in the same colors as ours! Prayers of thanksgiving for your safety. Tis an awe-filled sight, those tornadoes.

I absolutely love seeing the pictures of your area. More, more, please! And as always, your needleworks are beautiful--the fruit looks yummy!